I started the firing last Thursday at 7am and finished a bit earlier than usual, at around 2.30pm on Friday. Andy came over to help, which was great. I did a slightly looser pack at the front than usual with only one level of shelves. There was also an extra foot on the chimney and I refitted the grate area at the front. The firing itself went very well. Nice and smooth up to around 1100C then still a bit of a nudge to get it up to cone 9 down throughout, which we managed by around 8pm. A night of slow soaking, then gradual temperature rise till cone 12s down. This is usually another nudge but was pleasantly relaxed this time. Less reduction than the usual and then a few days of nail biting. 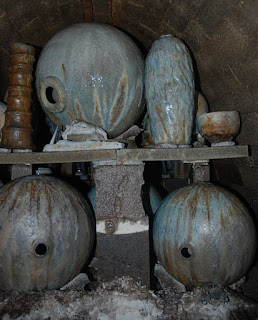 Today was the big day + with my heart in my mouth I opened it up. The photo is the view from the front, which is usually the best spot. The lesser reduction had made a difference here, which isn'r quite as good BUT the rest of the firing seems (so far) mercifully very good - especially considering it was really a very large test firing!
More images later.....
Posted by matthew at 17:22 2 comments:

Well, it's been a long time since I posted anything. After the last test firing I went on a few trips to collect clay samples and started preparing for a large wood firing. This pile of hornbeam is now nicely cut, split and stacked ready to go. 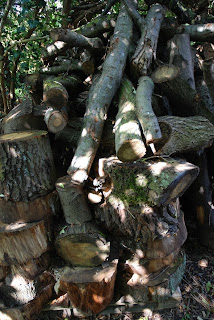 Then, many many days of preparing raw materials: clays and rocks. It is all just so incredibly time consuming. I've never really previously considered the ease in just opening a bag of commercially prepared clay, but from now on.......well, I'll never look at a bag of clay in the same way!
The firing has been delayed more and more as I grapple with practically every ceramic fault known to man, but at last I am glazing and doing a quick last minute biscuit firing. Packing next week and then firing. Andy has generously agreed to hep me again and I am now hoping for a 2 week continuation of the mild weather.
More posted soon - honest!
Posted by matthew at 08:15 1 comment: