.....the firing as performance 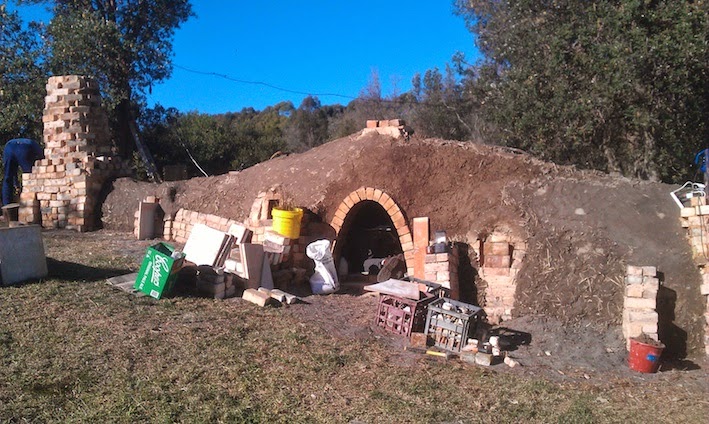 ....so, the kiln was ready and the pots, dry and wet alike, were taken over for the big pack. The back section was packed through the 2 side doors and the rest through the front. I did say wet, and I mean it. A couple of the bigger pots got knocked on the way in and were carefully molded and repaired once in place. 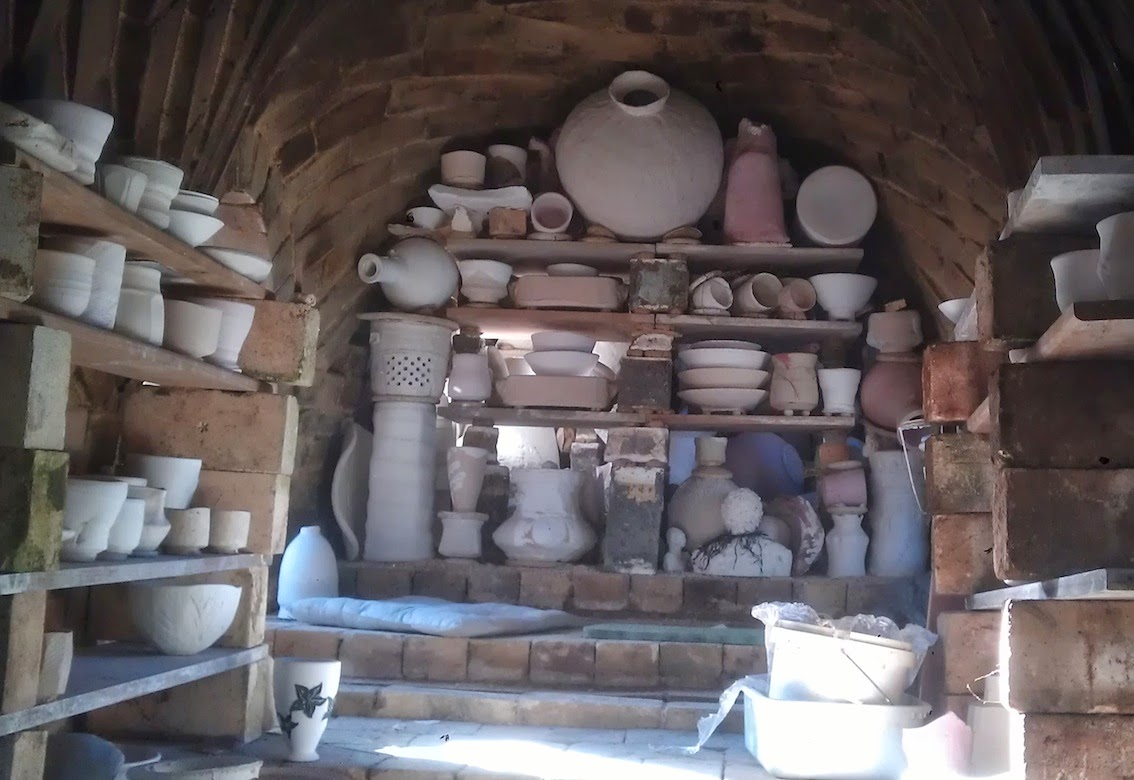 This image shows the back section, just behind the side arches, under the hump of the 'whale' kiln. In front of this stack went 3 large jars, then 2 more stacks before the firebox. Packing took 2 days. 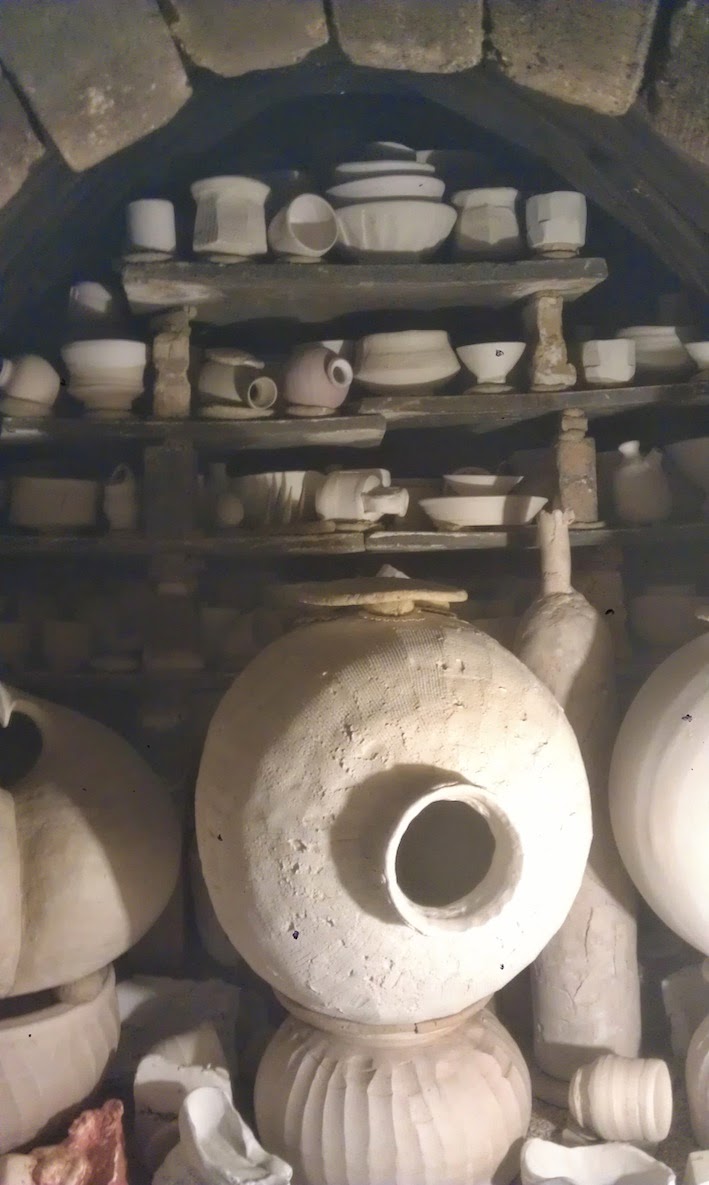 This image is the view from the front stoke hole - Scott Parady's large jar resting on Ray cavill's prawn bowl (for people who really like prawns!). 2am the kiln was lit with a very gentle flame, curling into the chamber through the grate holes. This was maintained for the next day and night to try and dry everything out. The kiln was steaming, but hard to tell what was pot water and what from the cow dung.
The firing schedule was very different from mine - a slow rise in lightish reduction/neutral atmosphere till cone 8's were going. At this stage it became apparent that something bad was happening with the floor or props as the front stack began to teeter and lean forwards. Cone 8's went at the front sidestoke and sidestoking began, bringing the temperature up slowly throughout the kiln.
After around 24 hours at stoneware temps the front stack collapsed into itself and the stoking space behind it. Emergency caesarian was carried out to free up the stoking space, pots being removed with raku tongs. Some of these were rather good with a surprising build up of ash on their surfaces......ash and....salt! Yep, looked like a salt firing. It seemed that perhaps the wood that had grown at the site, being next to the sea and a large saltwater lake, had high sodium levels. 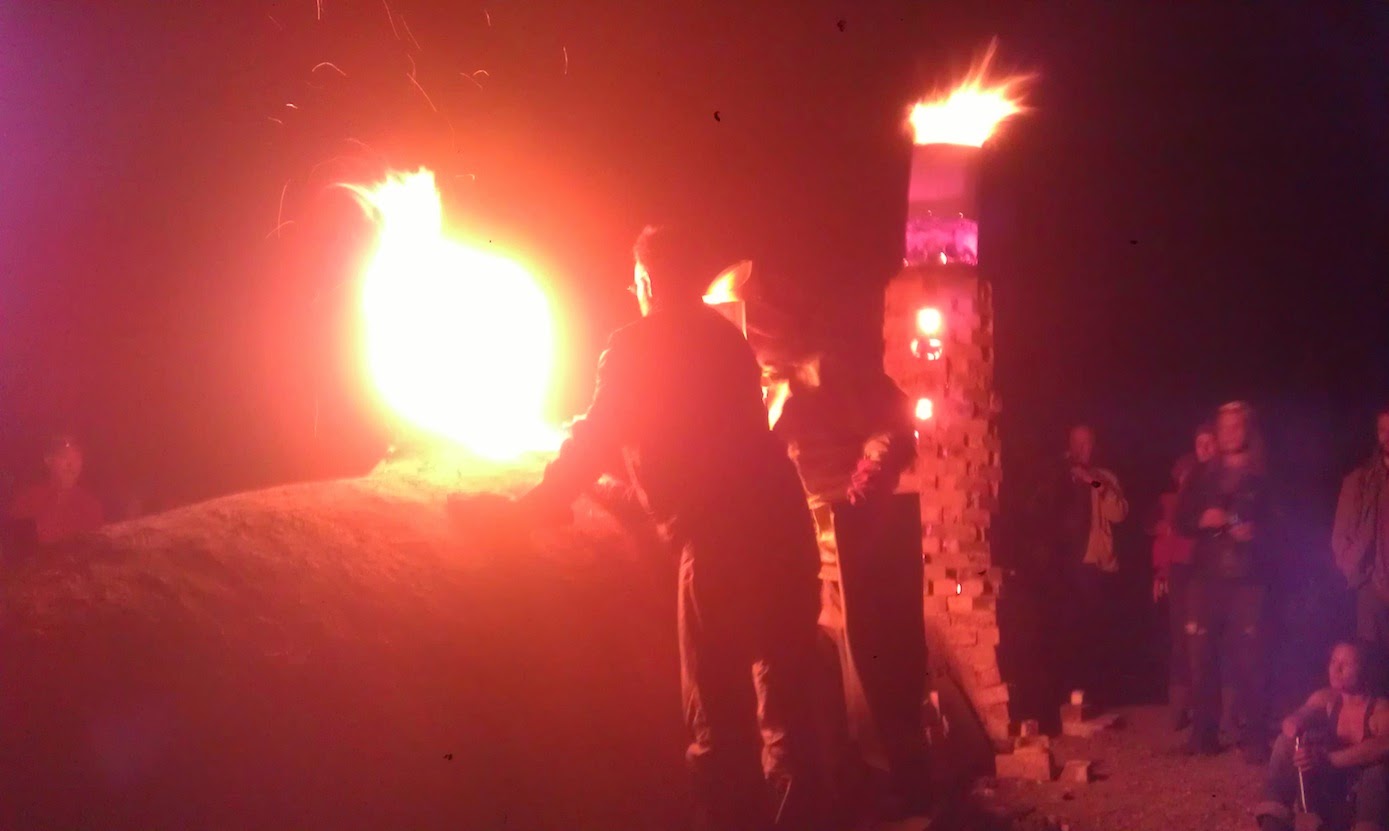 Day 5 was spent overstoking and building up large ember beds in all areas of the kiln - constant heavy reduction. Finally, spectacularly, sacks of charcoal were funneled into the whale's hump and back of the kiln. The temp in the kiln had dropped somewhat by now but the temp at the bottom of the chimney was crackling white - maybe cone 14 - 15.
3 days and some early brick removal later and the kiln was opened. 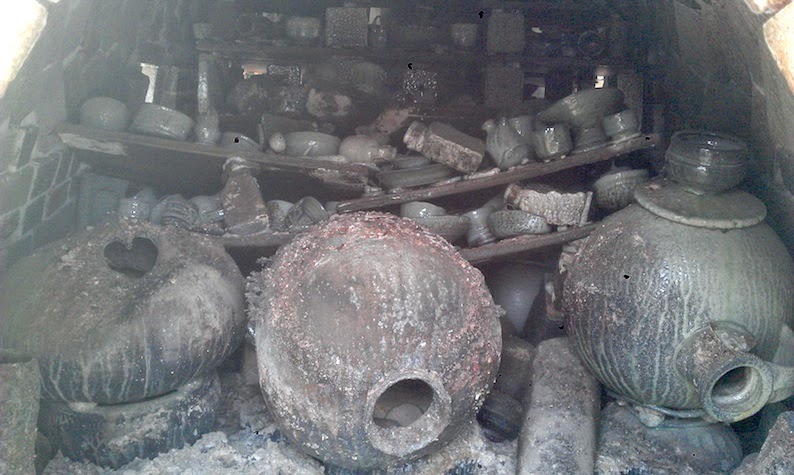 Amazingly, for a performance piece, with untested clays and slips, glazes, wood and kiln, there were some rather beautiful pieces in the firing. Even a few survivors from the collapsed front stack. Further back it became an almost unrelenting expression of grey, but even here the sidestoke areas yielded some interesting results. Did it make me want to explore reduced cooling? No....but there were some packing and firing techniques that I'm sure will find a way into my firings in the future.

Making with the unknown 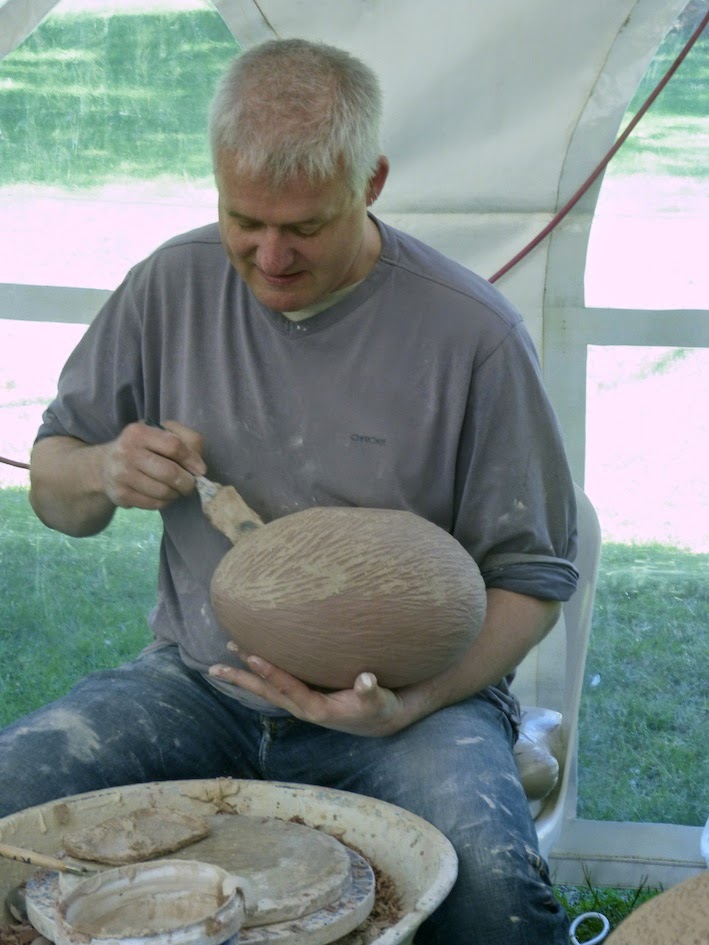 I rarely post photos of me.....but here goes.
The first week we each grabbed a wheel and a table and got to grips with the range of clays that were stacked up at the end of the marquee. With little to guide us but colour and texture we set about preparing blends and mixes with the fat sand (that was being used as mortar for the kiln) and the white quartz filled kaolin from a nearby brick pit. 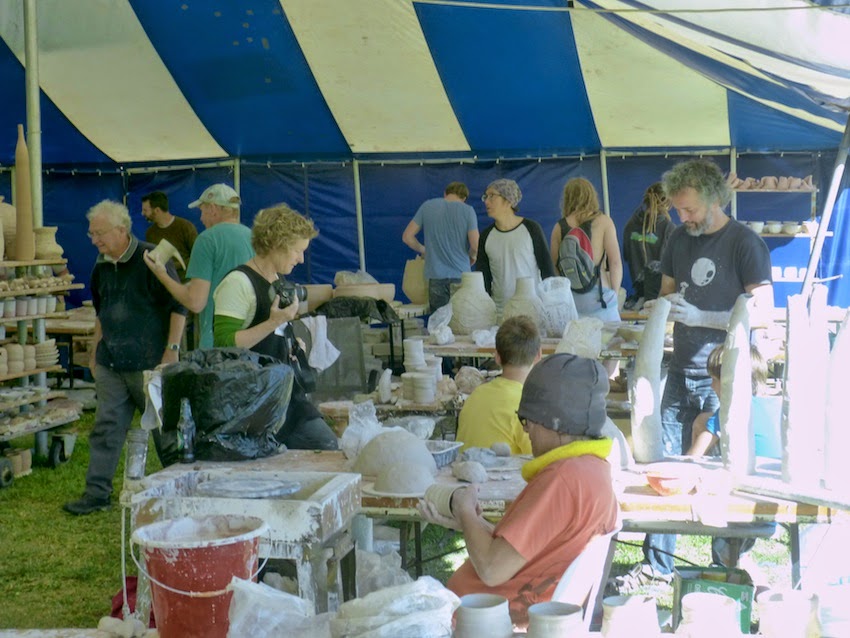 Pretty soon the racks were filling up with an exciting variety of work. Liner glazes and slips were mixed up by volume (with fingers tightly crossed). Within four days or so the kiln was finished, the packing and firing dates set and the race was on to dry everything out as much as we could. The atmosphere was buzzing - it was so different from my usual solitary making process - no competition, just pure enthusiasm. 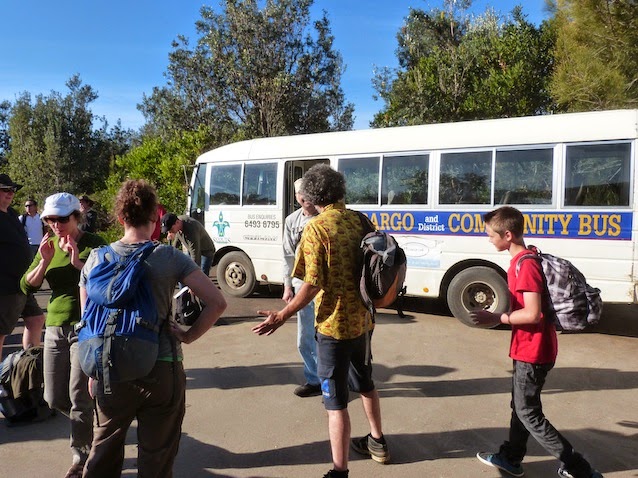 To break the routine we got taken out on a variety of excursions, overtaking the local pub, fish and chips in Beramgui and an unforgettable climb up a nearby granite hill, with an aboriginal guide to a sacred site. 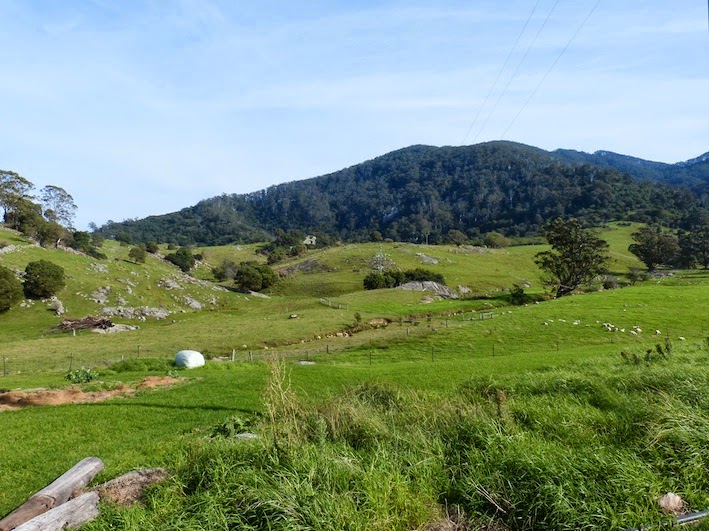 The hill stands high over the surrounding countryside and formed the backdrop to many of the places we visited, such as Daniel Lafferty's home and Tilba beach, where we went fishing and I (honestly) caught a shark. 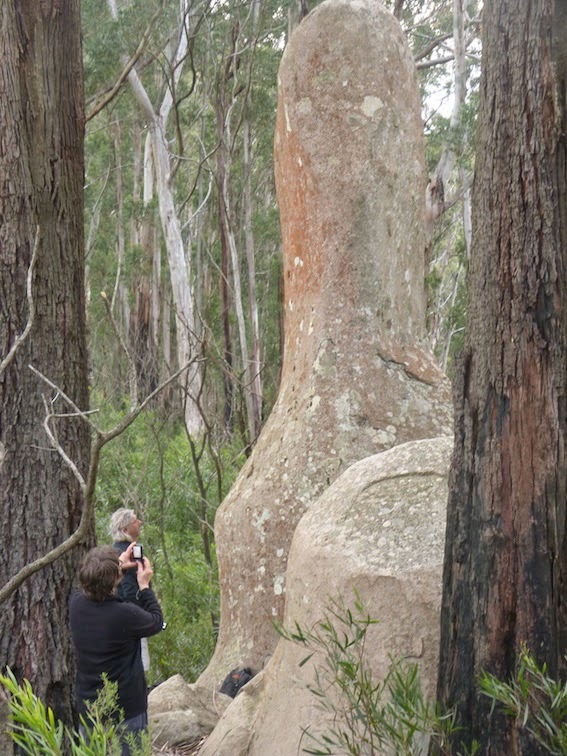 The sacred aboriginal site at the top of this hill was truly awe inspiring, with stunning, softly weathered, beautifully surfaced granite sculptural forms rising into the forest. Each had it's own story, as part of the dreaming for that place and within creation. Nature always does it best!

Back Up from Down Under

Aaaaah......jet lag. It's been a long time since I experienced falling asleep standing up. I flew in yesterday from a truly unique experience at the Edge of the Shelf Woodfire Conference in Mystery Bay Australia. The location was stunning - on the edge of a saltwater lake, right next to the ocean. 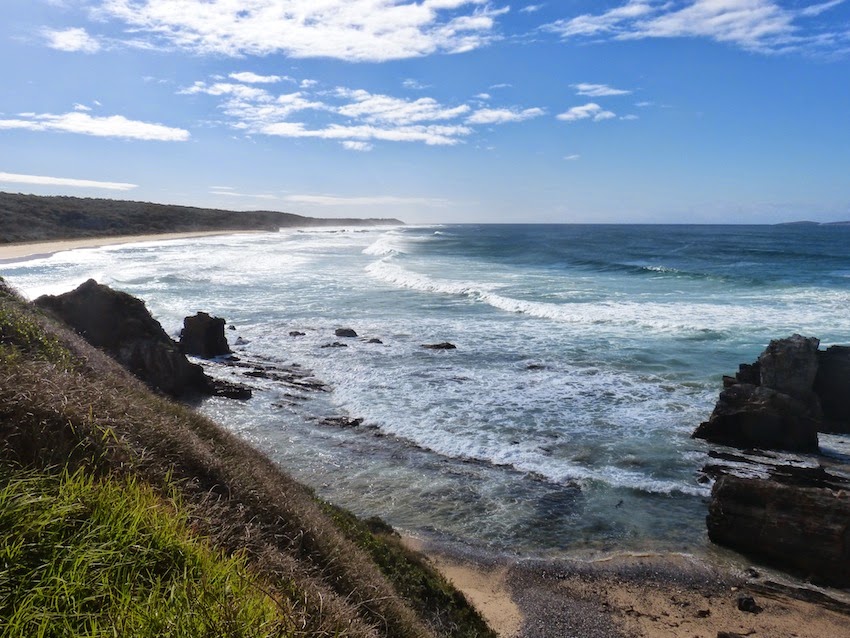 Those clouds soon disappeared and we had 3 weeks of glorious blue skies. Unfortunately for my blog, the internet access was extremely limited so I wasn't able to post live. Instead I will put up a series of posts that illustrate the event. 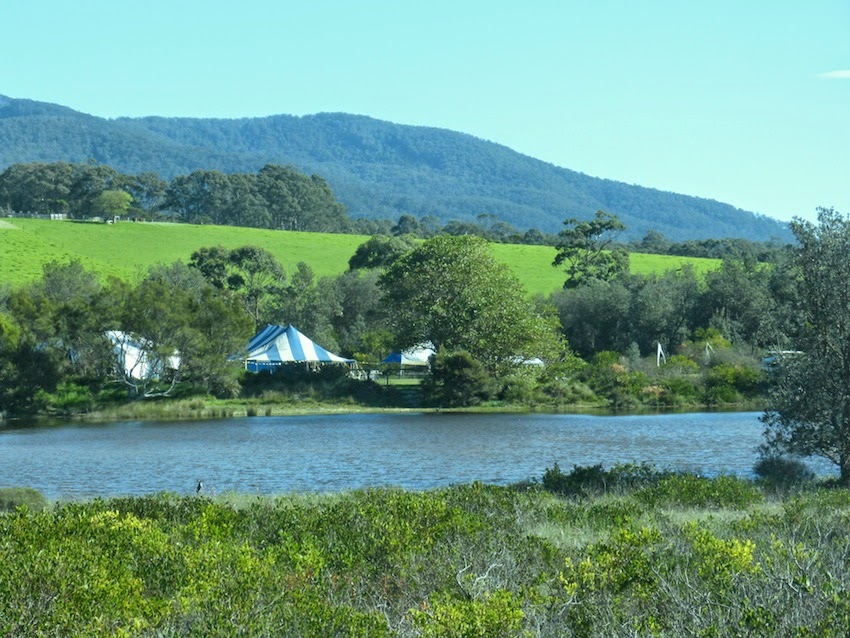 There were 21 demonstrators from around the world - France, Korea, Australia, New Zealand, Japan, US, Brazil, Nigeria and the UK, invited by Aussie woodfirer Daniel Lafferty and his team. The venue was originally built as a yoga retreat, with a central venue, individual yurts and cabins on acres of beautiful coastal land, that is now often used as a wedding venue. Luxury! 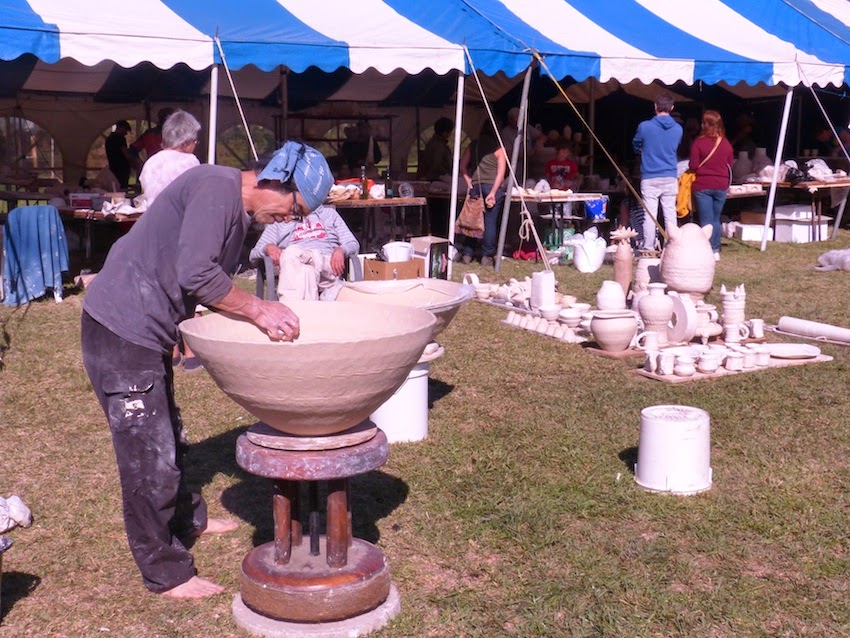 A number of marquees and tents had been erected, one being our 'studio', with racks, tables, wheels and pallets of clay. The first week was taken up with demonstrations, everyone working hard to make enough work to fill the kiln that was being built at the same time. Fueled by great food, excitement and Coopers Pale Ale, the making sessions went well into the small hours - it was almost like being at college again. Seeing the variety of making styles and work produced from the same materials was inspirational. 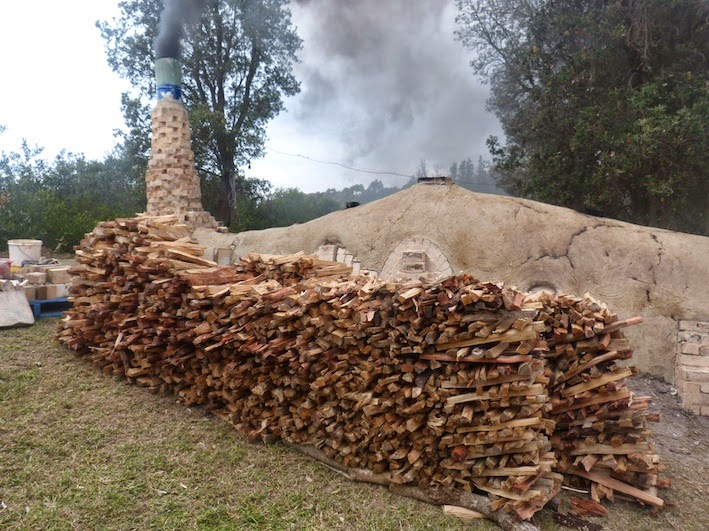 The arch of the kiln was finished by about day 4, then it was covered by a fireclay, sand and cow dung mortar. I counted myself lucky not to have to mix and apply this but it was impossible to escape the smell of it cooking as the kiln warmed up during the firing.
Most of the clays supplied were commercial but there was an interesting local clay brought in by Daniel, and I made up a glaze from pumice that I collected on the nearby beach.
More to follow soon........
Posted by matthew at 09:28 No comments: