Delight is in the detail

All the grinding is done and I've started taking photographs of every stunner that came out of the kiln, so I thought I'd share some of the details that show why this was such a special firing. 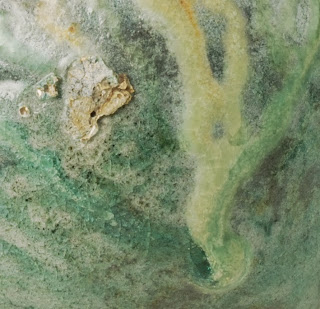 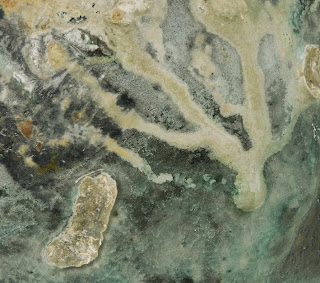 This is from the front of the pack, where the ash deposits are heaviest.

The image on the right is underneath the crawled piece at the front of the kiln. 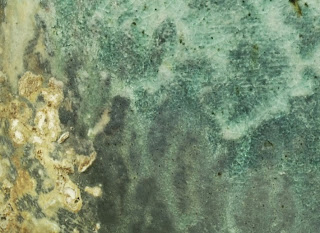 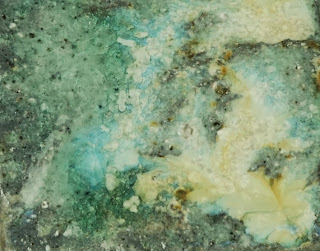 I got some stunning watery blue/greens from my new glazes from Malvern rocks.
They are very stiff glazes but react well to plenty of ash. 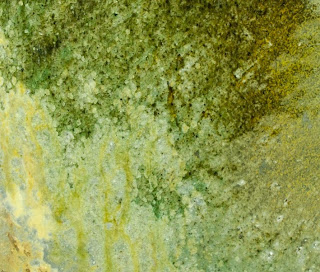 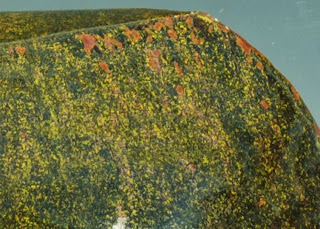 This dark glaze is coloured with haematite that I found high in the Eskdale hills. It's a deep blue/black glaze that gives a dusting of gold crystals with ash.


And finally - some electric blues. 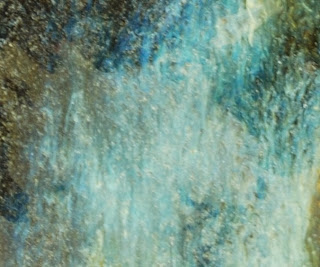 An early Christmas present for me.

It was with some trepidation that I started scraping away the mortar from the bricks of the stoke hole and side door, as during the firing I had seen areas of glaze apparently lifting off the surfaces of some of the pots at the front of the kiln and by the sidestoke hole. When this has happened previously the glaze has landed on the kiln shelves, melting there, and leaving bare scars on the sides of the pots. In contrast to my usual contemplation of the pack and firing while I waited for the kiln to cool down, imagining the results I might achieve, I tried to put it out of my mind. 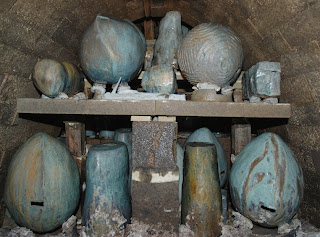 The first view I had was of the front. Apart from an obviously crawled piece to the right, the setting looked surprisingly good. As I unbricked the side door and began unpacking the back chamber I realised that, for the most part, it had been a very successful firing. My excitement grew as I realised that I was unpacking some of the best pieces I have got out of a kiln.

The ashing was good throughout, and though there seemed to be less obvious effect from volatiles (potassium) on the work, there was a good sense of drame through most of the pack. 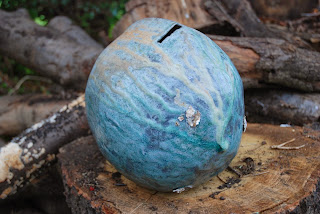 This quick pic shows one of the pieces from the front of the firebox, with heavy ash runs and some stunning colour.

All wrapped up ready for christmas

The kiln was lit yesterday morning at 7am, before dawn. Svend Bayer drove over in the fog to help me with the firing + experience the relatively short firing. 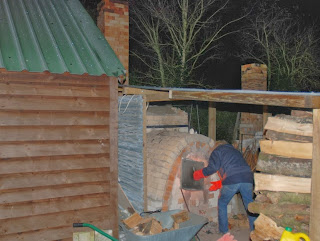 It was a beautiful firing - slow rise to red heat, reduction started at 3pm and a steady climb to 1250C. Cone 6 was over by 7pm and cone 8 was over at the front by 9pm. 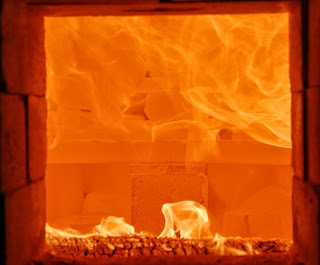 By midnight cone 9 was over front and back and cone 10's were soft. Svend took the 3am shift and by the time I got up cone 10's were down throughout and cone 11's were looking soft. Often the morning sees pretty concentrated work nudging the kiln out of its overnight slumber and coaxing it up in temperature, but today it was lively and raring to go. Cone 12's were down by 12.30pm, the embers were raked away from th front of the pack and the kiln soaked for an hour. By 1.45 everything was clammed up and it was time for a celebratory ale to toast the firing. 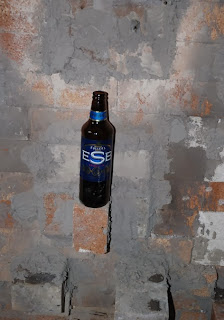 Fingers crossed for equally good results! It's going to be a long weekend......
Posted by matthew at 17:50 1 comment:

.....before Christmas and (hopefully) before the real cold weather arrives. The kiln is packed and bricked up. All wood cut and split, with this lovely big pile of finer stuff to start off and to use if the temperature rise sticks. 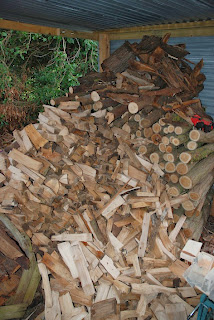 The starting day is Wednesday, so fingers crossed for reasonable weather. Svend Bayer is coming to help me fire, which is great - especially as he likes the 3am shift (my least favourite).
I have a whole pack of new forms and plenty of new glazes. Many of these are from the last place I collected from - The Malvern Hills - using the oldest rocks in England. I also have some new variations of Galloway glazes that came out exceptionally well in the last small kiln firing.
Posted by matthew at 16:20 No comments: