After the successful coprolite testing and firing I am now working on another research project. This time developing clay bodies and castable for kiln building for the Oxford Anagama Kiln Project . These are the second series of clay body tests, and what's interesting for me is how much can be learnt about a clay without recourse to expensive scientific approaches, such as chemical analysis and temperature expansion tests. 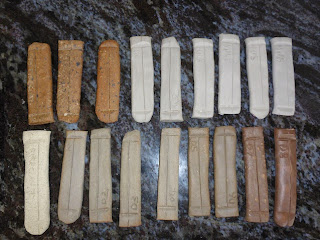 First up, shrinkage bars. These are made from around 100g of made up clays, rolled, flattened and marked accurately with a 10cm line. Dry shrinkage and fired shrinkage percentages can be measured. The bars also give other invaluable information such as colour (and likely iron content), warping, cracking and (as the far right bar on the lower line shows) bloating. 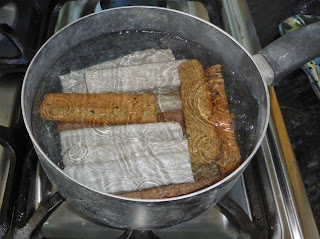 Straight from the stoneware firing in a gas kiln, the bars are weighed, then boiled in water and left for 24 hours. This is to allow water to enter any pores in the clay so that the clay can soak up as much as it can.
The bars are then wiped with a lightly damp sponge and weighed again. 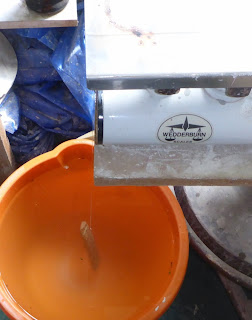 Next is the vaguely Heath Robinson contraption shown here. The bars are suspended on a fishing line, from the scales, so that they are suspended in water. Their suspended weight is measured.
The porosity of the clay can be calculated using the following formula:
soaked weight - dry weight/soaked weight - immersed weight x 100
Simple!
Porcelain often has a very low porosity as it is fully vitrified, giving it translucency. However, over vitrification can be problematic for stoneware clays, and a porosity of between 2 and 4% is generally better. 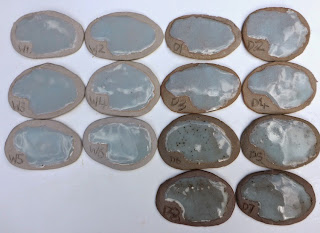 I also need to get an idea of the expansion/contraction of the clay during firing, and thus the silica content of the clay. The higher the free silica content, the more the clay shrinks on cooling and therefore the less glazes might craze. Too much of this, especially in a long woodfiring, can lead to dunting and brittle pots. I make small tiles of the clays and put a standard clear, or in this case celadon, glaze on, so I can see the extent of crazing on them. Too much and I may need to add quartz to the mix, too little and less quartz or the introduction of a lower silica (higher crazing) clay.
Posted by matthew at 12:17 3 comments: